The artwork pays homage to the durability of nature’s works, as well as Nefertiti’s legacy as one of the most powerful women in history

Slovak artist Tomáš Libertíny has made a beeswax bust of Nefertiti with the help of 60,000 honeybees.

The artwork, titled “Eternity”, is based on a 3D model of the original bust of the ancient Egyptian queen, believed to have been crafted in 1345 BC which is now permanently on show at Berlin’s Neues Museum.

The sculpture took two years to complete: first, a live installation of the 60,000 insects building their beeswax honeycombs around a framework of the bust was shown at Kunsthal Rotterdam in the summer of 2019. After some final touches, the completed artwork was revealed in December 2020 as part of Melancholia, Libertíny’s solo show at Rademakers Gallery in Amsterdam, which runs until 30 January 2021. 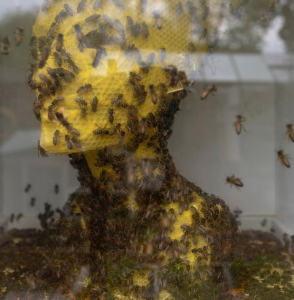 The artwork pays homage to the durability of nature’s works, as well as Nefertiti’s legacy as one of the most powerful women in history. “The beeswax sculpture makes a connection with the idea of ‘mother nature’”, says Libertíny, who was born in Slovakia but lives and works in Rotterdam. “I chose Nefertiti because I wanted to materialise a symbolic queen for the colony. There are not many women in history that have both the fame and the face associated with her name”.