No one was injured in the blaze

In what can only be described as a freak accident, a fire started in the rental car overflow lot of the Southwest Florida International Airport on Friday, damaging at least 3,500 cars and spreading to cover at least 15 acres. While the cause of the fire is still being investigated, a lot of comments are coming in regarding parking just-driven cars with hot exhausts on dry grass. Heat and easily combustible materials are never a good cocktail, and a lot of people are thinking that this might very well be the cause. 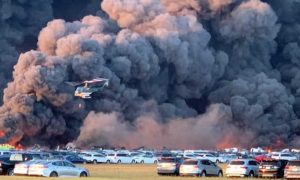 The fire itself drew a combined response from fire departments across Lee County, as well as assistance from aviation and fire department units in neighboring Charlotte and Collier counties. Law enforcement was also on hand to help control traffic and direct travelers to new temporary parking and areas far away from the scene. Charlotte county’s aviation unit completed 80 drops over the blaze, putting their Huey to excellent use, and can be seen in some of the photos that we were able to source from the police. 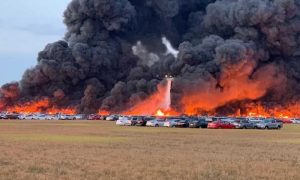 The fire was fully contained and extinguished by Saturday as first responders were battling the blaze throughout Friday night, making sure to put out the flames and prevent any more damage to surrounding areas. The remaining 3,800 rental cars belonging to various companies were relocated to a safer area and were undamaged.

Thankfully, no one was hurt in the fire, and officials are currently getting down to the bottom of this. With Florida’s temperatures hitting the high 80s at times, a general dryness, and lack of rain, it’s pretty darn easy to start a fire this time of year. Let’s hope that the incident will teach management the consequences of putting close to 8,000 cars in an open, grassy field under the hot sun.