UPDATE 2: The reaction of some of the illegal immigrants who were singing “bye-bye to Moria” was recorded in a video that was posted on Twitter.

There are increasing indications that the fire was an act of asymmetric warfare against Greece.

One of the videos. Listen at 01:10 singing “burn Moria burn, bye bye”. A second before that, one of them says “memnun memnun” which means grateful in Arabic & pleased in Turkish.

In the mean time, during the fire a Turkish drone was closely monitoring the situation.

#Turkey surveying with drones the situation at #Lesvos & #Moria for hours pic.twitter.com/SyyKf81TrT

UPDATE: The government spokesman Stelios Petsas speaking earlier today to Mega Channel stated that “we are also examining the scenario of provocation. We will examine it and evaluate it”.

As he said the island will be declared in a state of emergency. According to Mr. Petsas, “no one who was inside the camp will be allowed to leave the island”.

The refugee camp in Moria, in the Greek island of Lesvos was burnt down during the night after a series of fires that started just outside the camp went out of control dye to the strong winds that here blowing.

Daylight shows the magnitude of the destruction of the camp of 13.000 refugees and illegal immigrants in Moria.

According to locals, the fire was an act of arson as many fires broke out around 12 midnight on Tuesday simultaneously at different locations around the camp as well as in two other areas in the island as a diversion.

When the firefighters came to the scene the illegal immigrants tried to stop them by throwing rocks against them.

A friend from #Moria camp recorded this now live that big part of the camp is in fire. More than 12 000 vulnerable migrants and refugees are afraid of + coronavirus inside and now this big fire. #LeaveNoOneBehind pic.twitter.com/G9qZlpqftl

The migrants reacted badly to the news that 35 of them have been found positive for the coronavirus and should be isolated together with their relatives. As stated by the Secretary General of the Reception of Asylum Seekers of the Ministry of Migration Policy and Asylum, Manos Logothetis, the disaster at the Moria Central Hospital “is absolute”.

In order to assess the situation and decide on measures to address it, there is an extraordinary inter-ministerial meeting going on right now that started at 9.30 at the Maximos Palace under the Prime Minister Kyriakos Mitsotakis with the participation of the Minister of Civil Protection Michalis Chrysochoidis, the Minister of Migration Policy and Asylum Notis Mitarakis, the Deputy Foreign Minister George Koumoutsakos, the Minister of Interior Takis Theodorikakos, the Deputy Minister of Civil Protection Nikos Hardalias, the Commander of the NIS Panagiotis Kontoleontas and the Chief of HNDGS Gen. Konstantinos Floros.

The Turkish media set up a crisis scenery for Kastellorizo (video) 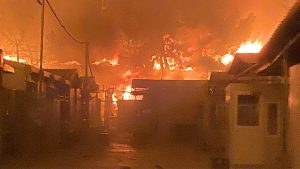 Also, three MAT squads from Elefsina are going to the island by C-130 military aircraft as practically 13.000 people have nowhere to go. The police units on the island are blocking them from going to the Mitilini. 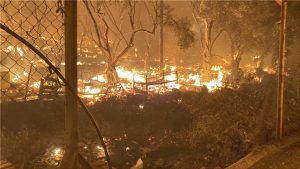 Meanwhile, it is unknown at this time where the 35 positive people in the coronavirus are, but also their close contacts, which should have been isolated with representatives of the authorities talking about a potential “health bomb”. 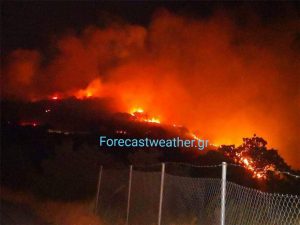