…and who was that “Rocket man”?

The video, which aired on state television in North Korea and was rebroadcast by various international media outlets, shows footage of military defense demonstrations watched by the country’s political and military leadership.

In addition to destroying bricks and tiles, soldiers appear to be lying on glass bottles and iron nails.

In other shots, their companions break concrete blocks on their bodies with sledgehammers!

The “finale” is particularly impressive, with men bending iron rods with their necks and breaking chains.

North Korean media explained that the purpose of the show of force was to teach the country’s enemies that its troops were “protecting peace with iron fists”.

Kim Jong Un announced that he was building an “invincible army” capable of launching a nuclear strike against the United States, and posed with dozens of soldiers.

Among them, though, was one in particular who drew the attention of everybody and caused many comments on social media.

It was a man in a shiny blue suit and a hat. 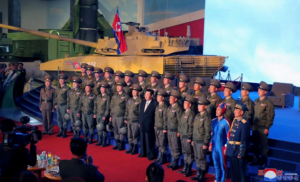 The mysterious man’s strange costume was commented on in various ways on social media, with some users giving him nicknames such as “Captain DPRK” and “Rocket Man” (as Trump had called Kim Jong Un).

Although his identity has not been confirmed, a specialist at the Middlebury Institute of International Studies in Monterrey, named Jeffrey Lewis, wrote in a tweet that he “looks like a paratrooper”.