He scored the winning points for his team

Kostas Antetokounmpo made headlines in the newspaper Equipe, after Villeurbanne’s great victory over Efes in which he starred.

Kostas Antetokounmpo was excellent throughout the game.

In fact, he scored the winning points for his team, while in the next phase he played an excellent defence on Shane Larkin, who missed the final shot.

So, Equipe decided to put him on the front page with an impressive photo. 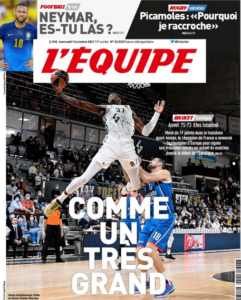 Newsweek: Turkey is becoming a problem for NATO & the US should pay attention – Analysis

Villeurbanne is so far the big surprise of the season, as it counts three victories in an equal number of games in the Euroleague.

Kostas Antetokounmpo has contributed to this course, as he averages 8.3 points and 3.7 rebounds so far, also having an impressive 73.3% on two points.