Located off the northeast coast of the Greek island of Chios, to which it belongs administratively, the small islet of Oinousses lies very close to the western coast of Turkey, and is often a stage for Greece’s belligerent neighbour to project its aggressive stance, as the Turkish Air Force regularly conducts illegal overflights above the islet.

The inhabitants of the island responded to the Turkish provocation, with the most recent one being an overflight two days ago, in their own defiant way by designing a huge Greek flag, covering an area of 1.5 acres, visible even off the coast of Chios on the ground.

It required nearly two months of manual labour to transfer the stones on a hill above the village, to design the flag and then paint with blue and white colours.

The local volunteers involved in the project were thrilled with the end result, aspiring to have the largest Greek flag designed in the country, sending their own clear message to those who dispute Greek sovereignty in the region. 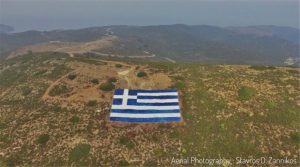 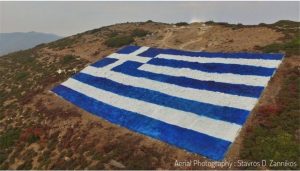 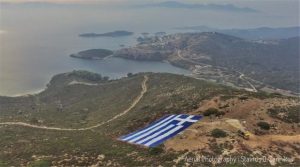 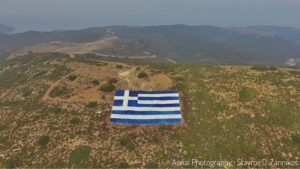 The photos are by Stavros Zannikos