The causes of the crash are being investigated

The accident that took place on Wednesday morning in Piraeus Port when a car fell in the sea, turned into a tragedy, after its driver was pulled out dead.

According to the first information, the accident took place at the gate E2, where the ships depart for Crete.

Authorities were alerted by a passing driver who saw the car fall into the sea. There was no other passenger in the car.

The unfortunate man, who was reportedly 55-60 years old, was transported by EKAB ambulance to Tzanio Hospital in Piraeus. A crane truck lifted the sunken vehicle. 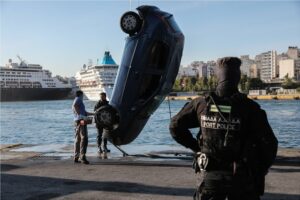 A Coast Guard vessel and a team from the Underwater Missions Unit rushed to the spot. The causes of the crash are being investigated.

Real Madrid, Barcelona, and Juventus might be banned from Champions League