Greek PM Kyriakos Mitsotakis used the Latin phrase “Pacta sunt servanda” (agreements must be kept) during his brief statements to upon his arrival at the EU Summit in Brussels Thursday, referring to the sanctions EU leaders had agreed upon in the recent past if Turkey continued to display its aggressive behaviour against Greece and Cyprus.

“We had decided that if Turkey continued its delinquent behaviour there would be consequences” was the message of the Prime Minister to indirectly aimed German Chancellor Merkel.

After talking about the issues that would be discussed at the meeting, the PM referred to the delinquent behavior of Turkey in the eastern Mediterranean. “At the October European Council, all the heads of state and government decided that if Turkey continued its delinquent behavior, there would be consequences,” he said.

At the same time, he noted that “the stakes are very, very clear: the credibility of the European Union”, adding that “now, it will be seen if we as Europe really are credible in what we ourselves have agreed. Pacta sunt servanda” 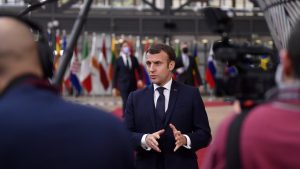 Meanwhile, upon his arrival at the Summit French President Emmanuel Macron said France’s position on the Turkish matter was unchanged and firm in the October European Council decisions and called for the sovereignty of EU member states and stability in the Eastern Mediterranean, North Africa, and the Middle East.

The issue was also raised by the EU High Representative for Foreign Affairs and Security Policy and Vice-President of the Commission Josep Borrell, who said that Ankara’s stance not only had not improved but in some cases had even got worse.