Mr. Pompeo’s visit reinforces the message to Ankara that Washington is looking for alternatives & this is a thorn in Erdogan’s side

US Secretary of State Mike Pompeo is been in Chania since Monday afternoon hosted by the Prime Minister Kyriakos Mitsotakis, after the end of his visit to Thessaloniki and the important contacts and agreements he signed there.
The US Secretary of State left Thessaloniki shortly before 7 pm for Chania, Crete.
At about 8 o’clock he arrived in Chania and at 9 o’clock, he arrived at the house of the Prime Minister, who welcomed him with his wife Mareva.

Kyriakos Mitsotakis and his staff had useful talks with the US Secretary of State, while in the evening he will host a dinner in his honor.

On Tuesday, the program of the American Secretary of State includes the important visit to the Souda Bay Base. The head of American diplomacy will be accompanied by Prime Minister Kyriakos Mitsotakis.

Archaeologists found 115.000-year-old human footprints where they shouldn’t be

Then, at 11.20 in the morning, there will be an extended meeting of delegations, at the Hellenic Air Force (HAF) 115th Battle Wing. Immediately afterwards, statements will be made to the media.

At 13.15, Mr. Mitsotakis and Mr. Pompeo will have a working lunch at the paternal home of the Prime Minister. 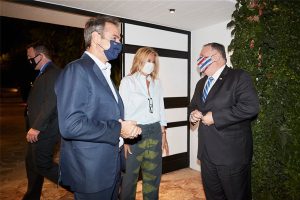 The Greek side will be represented by the Foreign Minister Nikos Dendias, the Defense Minister Nikos Panagiotopoulos, the Chief of the HNDGS Gen. Konstantinos Floros and the Director of the Prime Minister’s Diplomatic Office, Ambassador Eleni Sourani. 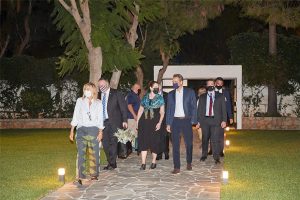 At 17.00 on Tuesday afternoon, the Prime Minister and the US Secretary of State will visit the archeological site of Aptera in the presence of the Minister of Culture & Sports, Lina Mendoni. 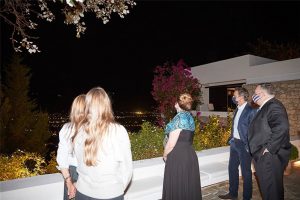 Times: Pompeo discusses Souda Bay Base instead of Incirlik

Meanwhile, a Times correspondent from Athens, referring to Pompeo’s intentions during his visit to Greece, is considering proposals for the relocation of critical US military assets from the Incirlik Base to Souda Bay Base.

As it is commented, the visit of the American Secretary of State is perceived as a sign of the declining patience of the USA with the Turkish President Erdogan.

Defense analyst Athanasios Drougos, according to capital.gr, told the British newspaper that it remained unclear “whether Washington can move all equipment, including the nuclear arsenal, from Incirlik”.He believes, however, that Mr. Pompeo’s visit alone, that reinforces the message to Ankara that Washington is looking for alternatives, is a thorn in Erdogan’s side.The newspaper notes that the head of the US Senate Foreign Relations Subcommittee on Europe, Ron Johnson, hinted earlier this month that the US was considering Souda Bay as an alternative to Incirlik.”The US naval base in the Gulf of Souda is now playing a much larger and strategically important role”, Drougos said.