The escort took place in the framework of Operation “Allied Sky”

On Monday, May 31, a US strategic B-52 bomber flew over Thessaloniki, the Northern Sporades, Athens, the Cyclades, and then over Crete, accompanied by two Greek F-16 fighter jets. 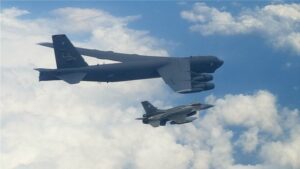 The flight of the American strategic B-52 bomber of the Bomber Task Force was carried out in the framework of Operation “Allied Sky” and the request for an escort by a pair of Greek F-16 aircraft was made by the US European Command.