Three Turkish frigates are accompanying the Tanzanian-flagged cargo ship “Cirkin”, which is moving southwest of Crete in the direction of a Libyan port, according to exclusive information from protothema.gr.

According to secure information, the European services that coordinate the Irini Operation have been alerted of a cargo ship, accompanied by three Turkish frigates, that is loaded with military equipment (weapons, ammunition and other items) to Libya. 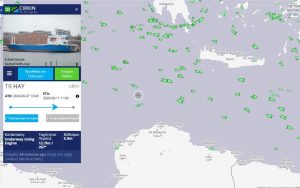 In the first light of day, today, Wednesday, the Italian commander of the European operational force ordered the Greek frigate “Spetsai” that was sailing between Crete and Libya to approach the suspicious ship.

At around 6 a.m. Wednesday, the Hellenic Navy Sikorsky S-70B helicopter flew over the suspicious cargo ship and requested the crew’s cooperation to a VBSS (Vessel Boarding Search & Seizure) operation on the basis of the mandate of the Operation Irini, which is to monitor the UN-imposed arms embargo in Libya.

There was no response from the cargo ship to the repeated calls from the pilots of the Greek helicopter.

A few minutes later, one of the three Turkish frigates responded that the ship was under the protection of the Turkish Republic.

In this way, the Turks refused the VBSS operation, indirectly confirming what its cargo really is.

Following more recent information from the Italian operational commander of Operation Irini, the Navy frigate “Spetsai” discreetly monitors the course of the cargo ship as it approaching the shores of Libya, accompanied by three Turkish frigates.