They want the abbreviation MKD or MD in military document

The Republic of North Macedonia has attempted to introduce in surreptitious and deceptive way the use of the term “Macedonia” in the form of the acronym “MKD” in an official bilateral document with Greece.

Skopje’s unprecedented demand was made during negotiations between the two countries’ defence ministries for the drafting of the Military Cooperation Program for the year 2020.

“As for the signing and implementation of the 2020 Military Cooperation Program (SFP) with Northern Macedonia, the Official liaison of Skopje stated the sudden change in attitude of this country and specifically that it seeks to use the acronym MKD instead of RNM” a confidential document of the Hellenic National Defence General Staff (HNDG) revealed, which is published by protothema.gr. “In Action Plan 2019 with Northern Macedonia, which was signed against PSS 2019, as well as in all relevant actions, the abbreviation RNM (ie Republic of North Macedonia) was used with the consent of that country,” the Hellenic National Defence General Staff document reads.

Dimitris Giannakakis, Greece’s ambassador to Skopje, in a telegram dated June 19, 2020, which was classified as confidential and urgent, emphasises that the text of the Military Cooperation Program has been a product of negotiations for almost a year (this is its 5th iteration) and it had been accepted by the HNDG, which had instructed him to sign it.”

In the confidential and urgent telegram to the Foreign Ministry’s central office, the Greek ambassador to Skopje also stressed that Europeans do not share Greek arguments for the need to use the RNM abbreviation. “At least our EU interlocutors here understand that the initial RNM are widely used in public administration. However, they accept the argument here that the initials MK and MKD are provided for in Article 1.3 (e) of the Prespa Agreement for all cases and do not favour our position that the abbreviations used for Northern Macedonia in the context of the EU and NATO need a different regulation”, notes Ambassador Giannakakis. 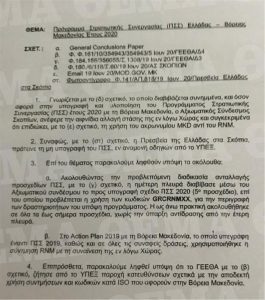 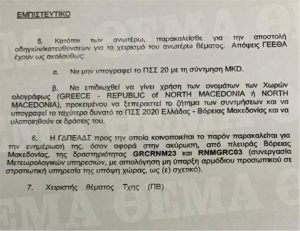 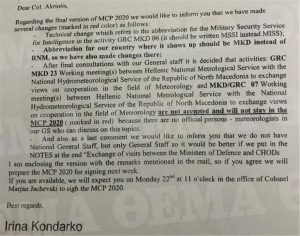 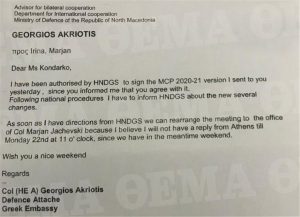 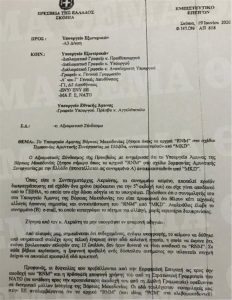