Greece has responded in detail to Turkey’s unfounded and unsubstantiated claims it made on the UN, by sending a letter describing Ankara’s provocative and illegal actions in the Aegean and Eastern Mediterranean. 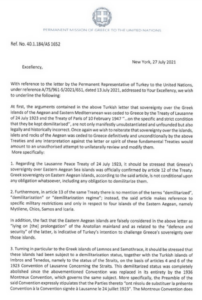 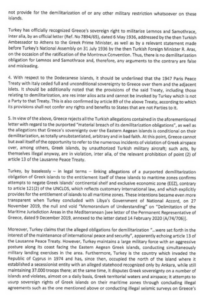 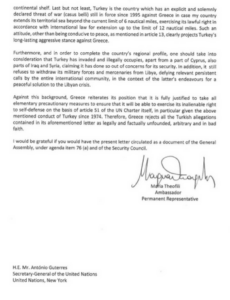 Shipowner Laskaridis to donate third vessel to the Hellenic Navy

It should be reminded that Turkey sent a letter on July 13th 2021 to the UN Secretary-General Antonio Guterres through its permanent representative to the United Nations, accusing Greece of “violating international treaties by militarizing the islands in the Aegean and Eastern Mediterranean”.

“We would like to point out once again that Greece is not fulfilling its obligations under the relevant conditions for the demilitarization of the islands in the Aegean and the Mediterranean,” the letter said, emphasizing the proximity of the islands – including Kastellorizo ​​- with Turkey.

“Greece threatens the security of Turkey with this behavior. These violations could escalate tensions, which will have consequences for peace and security in the wider region”, according to the Turkish letter.

They also state that they have, repeatedly, mentioned the “violations of Greece” through diplomatic channels and have raise the issue of determining the EEZ.

But the letter also mentioned something legally unsubstantiated. “If Greece does not fulfill its obligations under the current circumstances, it cannot claim its sovereign rights under these agreements, including the definition of maritime zones”, which is of course not true.

Finally, Ankara calls on Greece, in the context of good neighborly relations, to demilitarize the islands, based -as it claims- on the relevant agreements.