The Battle of Marathon took place in 490 BC between the Persian Empire and the defending Athenians. It is considered by most historians as a pivotal moment in world history, especially the western world. In many ways historians claim the Athenian victory eventually saved the flourishing of a new form of government called democracy at its infancy and its subsequent spread.

While some details about the battle location, which lent its name the Marathon race, have been lost, quite a few pieces of information have come to light through archaeological excavations, including information about the swamp that played an important role in the Athenian stand against the Persians. 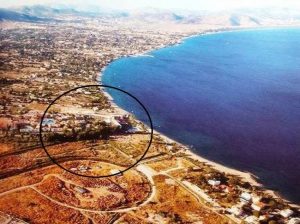 Image courtesy of book “The Battle of Marathon, the Overthrow-I Machi tou Marathna, I Anatropi” by historians Konstantinos Lagos and Fotis Karyanos

It was called by the ancient Greeks The Small Swamp in the “Brexiza” pass. The exact location of the Athenian camp and its remains have been detected, as well as the exact location of the Greek faction and the composition of its forces, with drawings on a modern road map of the area. The swamp acted as a death trap for the Persian elite forces who were bogged down in it while retreating from the unexpected surprise attack by the Athenian and Plateans

This swamp extended further north, where the American military base in New Makri in east Attica was later developed. The hitherto undefeated cavalry of the Persians was defeated by the ancient Greeks in a battle that would go down as one of the epic most moments in history. The ancient Greeks’ strategic aim was to block the advance of the Persians from Marathon to Athens. The aim was then to trap and neutralise the Persian cavalry and the elite infantry of the invader through the Brexiza pass and the Small Swamp.