Because the exact identity of the explosion is unclear, strange alternative theories has appeared

The Tunguska event was a large explosion that occurred near the Stony Tunguska River, in Yeniseysk Governorate in Russia. On June 30, 1908, a fireball was seen streaking across the daytime sky and within moments something exploded in the atmosphere.

The explosion over the sparsely populated Eastern Siberian Taiga released enough energy to kill reindeer and flatten trees for many kilometers around the blast site. It is classified as an impact event even though no impact crater has been found.

The object is thought to have disintegrated at an altitude of five to ten kilometers rather than hit the surface of the Earth. 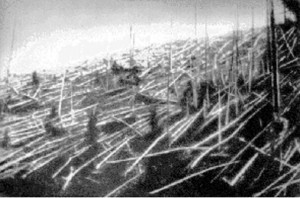 (Since the 1908 event, there have been an estimated 1,000 scholarly papers (mainly in Russian) published on the Tunguska explosion)

Upon arrival, he made arrangements with the local Evenki hunters to guide his party to the impact. Reaching the explosion site was an extremely arduous task.

When they arrived at the site, the spectacle that confronted Kulik as he stood on a ridge overlooking the devastated area was overwhelming. 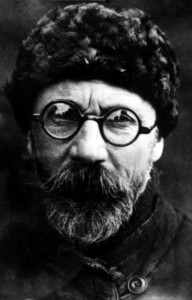 There was no crater to be found and instead there was around ground zero a vast zone of trees scorched and devoid of branches, but standing upright. Upon closer examination, Kulik located holes that he erroneously concluded were meteorite holes.

He did not have the means at the time to excavate the holes. 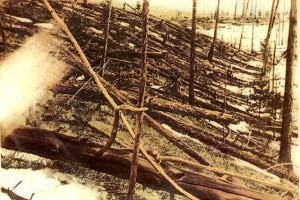 (Photograph from Kulik’s 1929 expedition taken near the Hushmo River)

After Kulik expedition, other expeditions were sent to the area in the 1950s and 1960s. They found microscopic silicate and magnetite spheres in siftings of the soil. Later expeditions did identify such spheres in the resin of the trees.

The spheres contained high proportions of nickel relative to iron, which was also found in meteorites, leading to the conclusion they were of extraterrestrial origin. 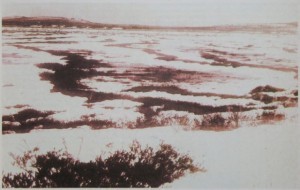 (The explosion registered at seismic stations across Eurasia)

In 1930, the British astronomer F. J. W. Whipple said that it was a comet, not a meteor that caused the damage.

A comet is composed of dust and volatiles, such as water ice and frozen gases, and could have been completely vaporized by the impact with Earth’s atmosphere, leaving no obvious traces. 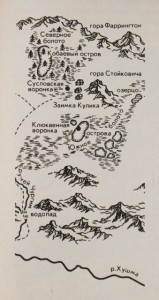 (It is estimated that the Tunguska explosion knocked down some 80 million trees over an area of 2,150 square kilometers)

But that was not the end of the debate. Because the exact identity of the explosion was unclear, strange alternative theories soon started to appear.

Scientists from the University of Bologna identified a lake (Lake Cheko) in the Tunguska region as a possible impact crater from the event.

Astrophysicist Wolfgang Kundt proposed that the Tunguska event was caused by the release and subsequent explosion of 10 million tons of natural gas from Earth’s crust. 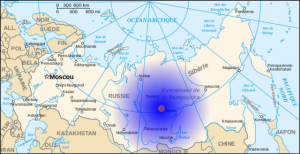 It is the largest impact event on Earth in recorded history, producing about 185 times more energy that the Hiroshima atomic bomb.