The Turkish hydrographic ship Cesme resumed its survey activities in the Central Aegean from today, March 1st, at dawn.

At the first break of light, the research vessel sailed again towards the Central Aegean with a course west of Agios Efstratios to conduct its hydrographic works in the region. The Turkish ship is not accompanied by any ship of the Turkish Navy. Cesme’s voyage is being discreetly monitored by units of the Greek Coast Guard.

The “pattern” of the illegal investigations carried out in the Central Aegean by Cesme reveals that the Turkish hydrographic company is doing the activities that have been determined in Ankara from north to south.

It commenced its hydrographic surveys from the area of ​​Lemnos and today it continues further south in the area of ​​Agios Efstratios. The question is whether by midnight on Tuesday 2 March it will have completed the work planned by the Turkish Navy or will extend the duration of the illegal Navtex 012221 in order to expand the investigations in the area of ​​Skyros. 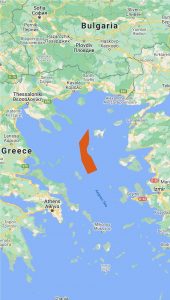