According to a report from defence-point, apparently, the price paid by the Turkish Armed Forces during the recent Greek-Turkish crisis in the wider area south of ​​Kastelorizo ​​was higher, apart and beyond the well-known “contact” of the Greek frigate “Lemnos” (F-451) with the Turkish “Kemal Reis” (F-247). 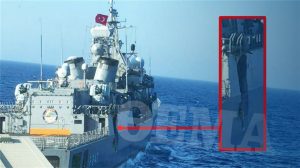 According to information, at the same time, a few days after the famous collision of the two frigates that will haunt the Turkish Navy for many years to come, the Turkish Air Force (THK) lost an F-16C fighter after a mock dogfight between Turkish with Greek jet fighters.

As already known since August 20, a pair of Turkish F-16s attempted to intervene in a Hellenic Army and Air Force co-operation exercise in the area near the island of Rhodes, a Close Air Support (CAS) exercise performed by F-4E Peace Icarus 2000 modernized jet fighters.

The Hellenic Tactical Air Force Command allowed the THK pair to get close enough and then F-16s from the north and south made a pliers-like tactical maneuver, trapping the Turkish aircraft in the area.

Hilarious scenes followed, with the Turkish pilots “losing it” (especially the No.2 of the formation), screaming in panic on the radio and the Greek pilots having a lot of fun all around them. The situation ended with the Turkish pair landing on Dalaman Turkish Base practically dry of fuel.

This is what we already knew.

According to newer information, though, one of the two Turkish fighters landed with literally no fuel at all and the engine shut down, something of course that compromises the ability of the pilot to fully control the fighter during the difficult and demanding landing phase.

US eyes December agreement on F-35 jets with UAE

The result of this situation was that the pilot could not land the aircraft normally and went off the runway, in a ditch. The pilot was not injured and came out of the aircraft safely.

The F-16, though, suffered serious damages and, as it became known, it was deemed “beyond repair”, that is the cost of repairing the aircraft was very high and was not worth the effort and expense of restoring it to flying status.

Considering that the cost of an F-16C Block 40/50/50+Adv jet fighter is several tens of millions of dollars, then one realizes that the Greek-Turkish crisis did not cost Turkey only the fuel of its fleet and jet fighters nor the patch of the hole that the frigate “Lemnos” opened on the side of the “Kemal Reis”, but also the loss of an aircraft that left the Turkish Air Force with one F-16C less…