According to Eurostat data

Eurostat has released its latest statistics showing the volume of goods passing through European ports. The data refers to 2017 and it shows that Europe’s 20 largest cargo ports accounted for close to 39 percent of total tonnage. Ten of the top 20 ports in 2017 were located on the Mediterranean, eight were on the North Sea coast and the remaining two were on the Atlantic coast.

Rotterdam was once again the busiest port by a wide margin. 433,293 tonnes of goods passed through it in 2017, 9 percent of the European total. Nearby Antwerp came second with 201,202 tonnes while Hamburg had the third highest volume with 118.761 tonnes. 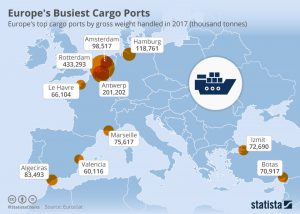