The progressive reputation of Justin Trudeau is in ruins Thursday morning after a third instance emerged of the Canadian prime minister wearing racist dark face-paint.

The first photo that surfaced, showing Trudeau in 2001 wearing brownface as part of an Aladdin costume, would have been enough to turn some voters off him forever. But, within hours, a second photo was published of him wearing blackface to sing the Jamaican folk song “Day-O,” followed by a third video of him sticking his tongue out wearing dark makeup.

What was initially assumed to be a deeply stupid and offensive costume at one theme party now looks like it was just one instance of a deeply troubling habit. 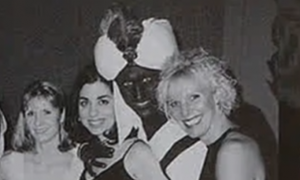 Trudeau admitted he “made a mistake” late Wednesday after the first photo was published. That showed him wearing brownface makeup to an “Arabian Nights”-themed gala at the Vancouver private school where he taught in 2001.