Ankara summoned the Greek Ambassador for explanations over the “removal of an Ottoman cemetery in the area of Halkidiki, without due attention”, according to a relevant announcement by the Turkish Ministry of Foreign Affairs.

According to the announcement: “A new school complex in the village of Simantra in Halkidiki is being built on an Ottoman cemetery, with 201 graves”.

The Turkish Foreign Ministry reacted after a provocative article in the Sozcu newspaper, according to which: “Greece looted Ottoman Tombs” in Halkidiki.
According to the announcement, the Turkish consul in Thessaloniki visited Simantra, where he was informed about the works being carried out in the area and the fate of the bones of the old cemetery. 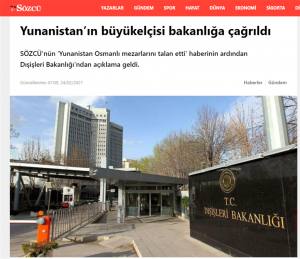 Afterwards, the Greek ambassador to Ankara, Michael-Christos Diamessis, was called in for explanations, while there will reportedly also be a reaction to the Greek Ministry of Foreign Affairs and from the Turkish ambassador to Athens, Burak Ozugergin.

The Turkish Ministry of Foreign Affairs demands that the construction works in the specific area be suspended, and the bones collected and be reburied according to the Muslim ceremony and that a sign be placed informing that the site was an Ottoman cemetery.

“Panepistimio” and “Syntagma” Metro stations closed at 4:30 pm due to gathering