Turkish media says Erdogan did what he promised

Tensions between Greece and Turkey in the eastern Mediterranean and the stand-off between the two countries’ navies is the main focus in Turkish media for a second day in a row, with Hürriyet writing “Turkey did not back down and did what it said”.

The survey vessel Oruc Reis is sailing on a northeast course escorted by a flotilla of 10 Turkish warships at the constant speed of about 5 knots and is estimated that it could leave the area Turkey has bound with an illegal Navtex at 15: 00-16: 00 at noon of Thursday showing signs that Turkey might have chosen to back down.

However, the Turkish pro-government newspapers report today that Turkey is “ready for everything”!

“Turkey is determined to defend its rights and is ready for any eventuality or conflict,” YENI SAFAK wrote. 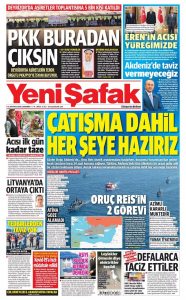 “Turkey wants a just solution in the Mediterranean with all the countries in the region meeting. But she is determined to defend her rights and is ready for any eventuality or conflict. The Oruc Reis will conduct surveys on 16 plots, including 7 on the Turkish-Libyan Memorandum border. The ship, traveling at a speed of 8 kilometres per hour, will collect data on the rich gas and oil fields. Another mission is to gather data that is necessary for the determination of the Turkish EEZ at the western borders”, the newspaper writes.

Newspaper Hürriyet talks about a “Greek theater in the Mediterranean. Turkey did not back down and did what it said.The Oruc Reis arrived in the southwestern opening of Cyprus to conduct research,” it writes. 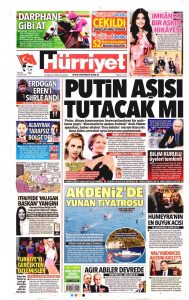 The SABAH newspaper writes that the Turkish president will talk to the German chancellor this week.

“Following his call for a summit on the Mediterranean, he will speak by telephone with Merkel this week. The issue of Erdogan’s invitation to the Mediterranean countries with the statement “let’s find a formula that satisfies everyone” will be raised in the telephone conversation, as well as the attitude of Greece”, the media outlet writes. 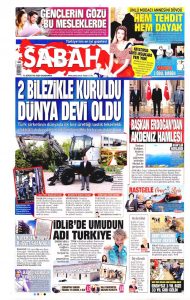 With the front page headline reading: “The Mediterranean is not the” Acropolis of Athens”, the Turkish pro-government newspaper Diriliş Postası is propagating Ankara’s positions on the provocative claims on the Greek continental shelf and the EEZ. 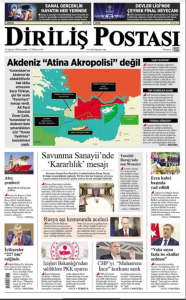