“If there is a war with Greece, I will be happy to be in the front line”, said an FSA member

Officials of the Free Syrian Army (FSA), who are fighting Assad’s forces in northern Syria, collaborating with the Turkish army that has invaded the country, declare that they are ready to fight against Greece, on the side of their “Turkish brothers”.

The Turkish newspaper Turkiye on Tuesday’s headline writes “we will fight alongside the Turks” referring to statements by Syrian opposition parties declaring their “joy” and readiness to fight against Greece in the event of a war with Turkey over the crisis in the eastern Mediterranean. 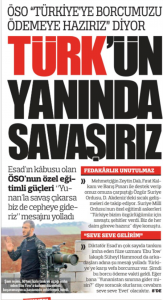 “Specially trained forces fighting alongside Turkish soldiers in Syria have sent the message that ‘if war breaks out with the Greeks, we will gladly go to the frontline”, according to the article.

Terrifying moment: Dozens of tourists are left “hanging upside down on rollercoaster for over an hour”!

Adviser to Erdogan: “We will sink the ‘Charles de Gaulle’ carrier”!

The articles continue: “The Turkish Armed Forces together with the OSO (Free Syrian Army), in the operations ‘Olive Branch’, ‘Euphrates Shield’ and ‘Source of Peace’ ensured the return of Syrian refugees to their homelands. The Syrian victims of the war do not forget the support of Turkey and are closely following the hot developments in the Eastern Mediterranean. Specially trained OSO soldiers declare their support for Ankara, saying ‘Turkey has fought for our freedom and gave martyrs. So we are always ready for our duty’. Suhail Hammoud, a missile expert nicknamed ‘Abu Tow’, serves in the OSO as the Assad regime’s nightmare. He sent a message on behalf of his friends. Hammoud said that he wants to go to the border with Greece and giving an example of faith he stated that ‘it is time to pay our debt to our Turkish brothers who became martyrs in our land. If they tell me ‘are you going to fight on the border with Greece?’ my answer will be ‘Yes'”.