The fire brigade is on alert

The fire that broke out in a fuel tanker in Elefsina and specifically in the Neoktisdta area in Aspropyrgos, near the refineries, is under partial control.

The tanker was carrying propane and explosions were being heard for a while. From the first moment, an order was given for the precautionary evacuation of the wider area. The fire quickly spread and destroyed warehouses with propane cylinders.

The fire brigade of Elefsina is on alert after a fuel truck transporting propane near Aspropyrgos has caught fire near the refineries.

The tanker is reportedly carrying propane, while explosions have been heard. A precautionary measure has been ordered to evacuate the wider area of the Neoktista settlement. Black smoke can be seen billowing from the area. 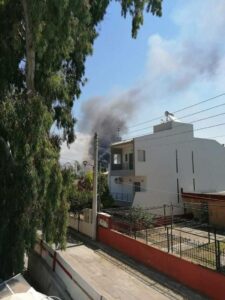 9 fire trucks are going to the area, with 27 firefighters.