The two had met in Paris during Fashion Week

A photo from the mid 1990’s of an encounter between Italian sex-bomb Monica Bellucci and a young Leonardo DiCaprio emerged on a Reddit thread posted by user potatorockstar.

The vintage photo is from the distant 1995 in Paris, during the Fashion Week then in the French capital, at the official dinner given by the Italian designer Gianni Versace.

Monica, 31 then, is looking down on a bedazzled 21-year-old Leonardo who is trying intensely to keep focus on the brunette beauty’s eyes, but her incredible bust, ready to burst out is making it very hard… 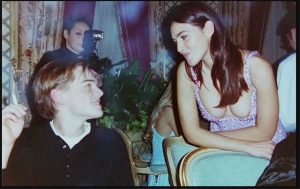