Even in today’s world of drone strikes and cyberwarfare, our ability to control the seas remains a key to global security, Fletcher School Dean James Stavridis argues in his new book, Sea Power: The History and Geopolitics of the World’s Oceans. A retired U.S. Navy admiral and former supreme allied commander of NATO, Stavridis describes the strategic importance of each of the world’s oceans, weaving together history, personal anecdotes and policy recommendations.

We spoke with Stavridis, F83, F84, about how understanding the world’s oceans can help make sense of today’s tumultuous world—and steer us away from dangerous shoals.

Tufts Now: It’s tempting to think of sea power as less significant than it used to be. Why is maritime power important now?

James Stavridis: If you look at the history of the world, great empires rose and fell depending on their ability to control the seas. Even today—consider the Korean peninsula: Our ability to keep deterrent forces there depends largely on aircraft carriers. We would defend against North Korea’s ballistic missiles by shooting them down from our ships, which can move and adjust.

In the Eastern Mediterranean, the U.S. fighter jet that just shot down a Syrian warplane was a Navy jet coming off an aircraft carrier, the George H. W. Bush. In the Arctic, where global warming is cracking open the ice, sea lanes of communication are opening, and hydrocarbon wealth is going to rise and be accessible. That will create enormous geopolitical competition, and all of that will occur at sea.

Sometimes people say, “We can’t use a Navy to fight terrorists.” Really? Navy fighter jets are dropping bombs on the Islamic State in Mosul and Raqqa today. Navy ships are moving Marines and all their supplies ashore into Afghanistan to fight the Taliban and the Islamic State. Our ships are at sea screening and patrolling and controlling the migrants that are flowing from these conflicts, and ensuring that terrorists haven’t infiltrated them. Without getting into classified material, I can say we use our ships to plug into that cyber sphere. We go inside the footprint of the cyberactivity, inside the cell zones. So our Navy not only is part of our geopolitical response to Russia and China, and not only part of our tactical military warfighting, but it’s also highly useful against terrorists.

You predict that the 21st century will be more about the Indian Ocean and its neighbors, the Arabian Gulf and the Red Sea, than about the Pacific or Atlantic. How is that area going to flex its muscle?

In the Indian Ocean, we see India and Pakistan taking their challenges to each other to sea. I would argue the next use of a nuclear weapon—if we see the next use of a nuclear weapon—is likely going to be at sea in a war between India and Pakistan. The Persian/Arabian Gulf is a flashpoint between Sunni and Shia; that conflict is playing itself out there. Off the waters of Yemen, that’s where crisis occurs, and I think it will continue to do so. 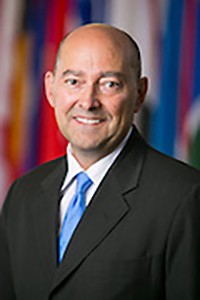 China is building artificial islands with airstrips—in effect creating unsinkable aircraft carriers—and making claim to the entire South China Sea. How should the global community respond?
First we need to understand how the Chinese view this. They are claiming this enormous body of water—it’s as if the United States were claiming the entire Gulf of Mexico as territorial sea. They want the South China Sea because it’s full of hydrocarbons, it’s full of fish and protein, and because it allows them to pressure their neighbors by controlling the shipping. If those waters become territorial seas, the Chinese can say, “Yes, you can come in, but no, your tanker can’t come through here.” The United States has to respond to the building of these artificial islands by demonstrating to the Chinese that their claim has no standing in international court. We do that by driving our ships right through those international waters, flying our aircraft overhead. It sends a strong signal.

The U.S. Navy dominates the sea, but you’ve argued that our 275 warships are not enough. What are the current challenges for U.S. security that more would help address?

We need about 350. No matter how good the individual ships are, you have to have enough to operate. When you look at the scope of U.S. interests around the world, 95 percent of the world’s trade moves at sea. We’ve got to protect those global commons and keep them open. 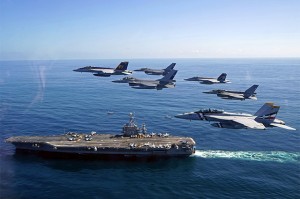 You’ve said the Arctic is a strategic hotspot. How will increased accessibility affect international competition and potentially conflict there?

Unfortunately, I think the Arctic is well on its way to becoming a real cold war, pun intended. Russia is on one side of the Arctic with a massive coastal footprint and on the other side are five NATO nations, including the United States and Canada. As the ice melts because of global warming, and all those hydrocarbons and all those shipping lanes open, that’s an enormous prize that those nations are going to compete for. For the United States, we should try to have a positive, peaceful, diplomatic dialogue with Russia about the Arctic, using international organizations like the Arctic Council. Secondly, we need to construct some number of ice breakers, harden our ships to operate in the High North and overall be prepared to face the extreme increase that we’re seeing on the part of Russia across the Arctic Sea.

You’ve led Navy ships in humanitarian aid missions, and in your book, you suggest transforming Naval Station Guantanamo into a base for projects in disaster relief and poverty alleviation. Why should the U.S. military be involved in humanitarian projects?

Because we have the enormous geopolitical muscle and resources to do so. Secondly, because we’ve done it so much over the years and are absolutely expert at it.

Humanitarian aid is of extraordinary strategic value. It’s relatively inexpensive to do these operations, and it allows us to portray the United States in a very different way: Not as a massive military power but on a very human scale, where doctors and nurses and engineers come off these ships to build clinics and wells and schools. It creates a real wellspring of respect and affection for the United States that we can’t get any other way. Those kind of soft-power deployments may be more important than the big aircraft carriers roaming the oceans.