Flying in attack formation, the group of Su-24 attack aircraft turned away just before Norwegian airspace

Haga Lunde had earlier in the day presented Focus 2019 (in Norwegian), the intelligence service’s report on threats and security analyses.

«Russia’s military activity in our region signals dismay with Norway,» Haga Lunde said and stressed that there are «no indications that relations between Russia and the West will improve in 2019.» 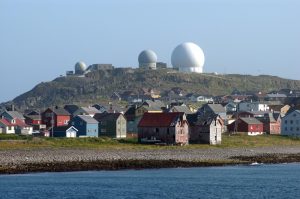 He then showed the map of how a group of 11 Sukhoi-24 (NATO name Fencer) supersonic attack aircraft taking of from Monchegorsk air base on the Kola Peninsula flying out in the Barents Sea before taking a 180 degree turn into an attack formation towards Vardø.

Vardø is Norway’s most northeastern town.