If Russia somehow cracks the code of detecting stealth-shaped fighters, the US’s F-35, the most expensive weapons system in history, is cooked

The commander of Sweden’s air force, Mats Helgesson, recently made the bold statement that his country’s Saab Gripen E fighter could beat Russia’s formidable fleet of Sukhoi jets with none of the expensive stealth technology the US relies on.

“Gripen, especially the E-model, is designed to kill Sukhois. There we have a black belt,” Helgesson told Yle at a presentation in Finland, where Sweden is trying to export the jets.

Russia’s Sukhoi fighters have achieved a kind of legendary status for their ability to out-maneuver US fighter jets in dogfights and pull off dangerous and aggressive stunts in the air, but Gripen may have cracked the code.

The Gripen can’t carry the most weapons and has no real stealth. And it isn’t the longest-range, the fastest, or even the cheapest jet. But it has a singular focus that makes it a nightmare for Russia’s fighter jets.

Justin Bronk, an aerial-combat expert at the Royal United Services Institute, told Business Insider that like the A-10 Warthog was built around a massive cannon, the Gripen was built around electronic warfare.

Virtually all modern jets conduct some degree of electronic warfare, but the Gripen E stands above the rest, according to Bronk.

Gripen pilots don’t like to show their cards by demonstrating the full power of the jet’s jamming in training. But the one time they did, it completely reversed the course of the mock battle in training, Bronk said.

“Several years ago the Gripen pilots got tired of being made fun of by German Typhoon pilots and came to play with their wartime electronic warfare and gave them a hell of a hard time,” Bronk said. One of the Gripens was “reportedly able to appear on the left wing of a Typhoon without being detected” by using its “extremely respected” jamming ability, Bronk said. 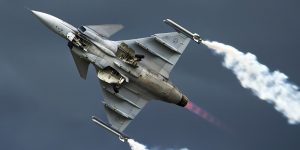