It was discovered during road works on “Stavrou Niarchou Street”

A prehistoric layer of human habitation, near the Ioannina Ring Road, was discovered during road works on “Stavrou Niarchou Street”.

In particular, remains of a prehistoric installation dating to the Bronze Age (2000-1100 BC) came to light, including stone tools, handmade artifacts, unpainted thin-walled and coarse-walled vessels, some of which are decorated with embossed or plastic motifs, such as and “tablets”, according to the Ephorate of Antiquities. 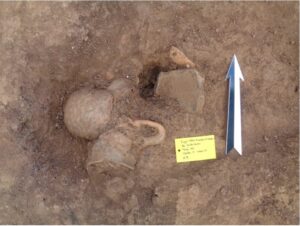 “This is an excavation set, which offers valuable information and data, regarding the habitation in the lakeside areas of the Ioannina basin, during the specific time period. It should be noted that the corresponding archaeological evidence is very limited, and for this reason, the discovery and study of this set will complement the fragmentary picture we have of the inhabited settlement in the interior of Epirus, in late prehistoric times,” the announcement said.