So long, Progress 72, and thanks for all the stuff.

The Russian-built Progress cargo ship went down in flames (on purpose) on Monday (July 29) and a space station astronaut made sure to capture its fiery doom on camera.

“Said goodbye to Progress 72 today to make room for 73P showing up on Wednesday. Caught this shot of it during reentry,” NASA astronaut Nick Hague wrote on Twitter Monday. “It looked like a big firework that lasted minutes — flickering, sparking, and pulsing with brightness before it faded into the darkness.” 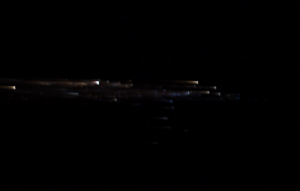 Hague watched Progress 72’s demise from the International Space Station, where he and five other space travelers bid farewell to the uncrewed cargo ship as it undocked itself from the Russian-built Pirs module after four months linked to the orbiting lab.

“It will reenter the Earth’s atmosphere loaded with trash and discarded gear for a fiery, but safe disposal over the Pacific Ocean,” NASA officials wrote in a status update Monday.