A popular summer destination, this precious Saronic island can be rediscovered in another guise

In Greece, summer is usually spent on its welcoming islands which help us rest, cool us in their seas, feed us in their taverns and quench our thirst in their bars. But if we really want to get a sense of their true nature, we must make the effort to return in the winter to take in the stillness and the clarity of the winter sun.

There is no greater satisfaction than to have these destinations all to yourself, where you can unlock the secrets that summer never reveals on empty beaches, a handful of taverns and peaceful quays. 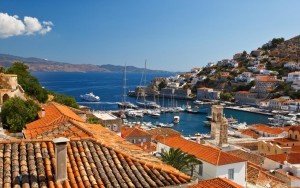 Hydra is my eternal summer love, but I’d never been there in the winter until a few days ago.

My rituals remained the same.

Whenever I return to its port, I always look to the right to greet the vessel that sits permanently at the edge of the breakwater. It is painted in bright blue with red hulls and a brilliant yellow crane on the bow. Her name is “Christos – Nektaria” and, over the years, she and I have become something like friends. After that I let my eyes wander to the town, and, upon seeing it, I feel that comforting sensation that the heart gets when it is content.

The few tourists disappeared along with the cruise ship, which stops at the island once a day, and the place was suddenly mine by midday. 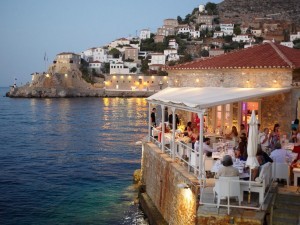 I began to walk. The waterfront looked twice the size without the crowds and tables and the awnings that provide shade the sun in the summer. The soft light of winter made the whitewashed walls shine brighter, and the ochre domes of the churches seemed to turn into a deeper color.

The sea had that gray-blue shade, which the late Greek painter Panagiots Tetsis described when talking about his love for his country, while the hills were green with the shrubs and growth which turn straw-colored in the summer. 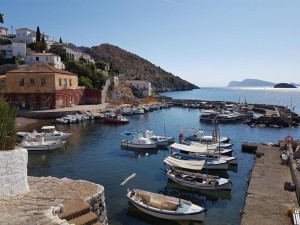 On the whole route to Vlychos, I had cats for company. Each accompanied me to the edge of its own territory – invisible to me but known to the cat – and straight away another would take its place in this feline relay race.

I chose a path which I didn’t know, a route which took me past the ruined house of Nikos Hadjikyriakos-Gikas, the old nursing home above Kamini, and one of the two cemeteries on the island. The houses were sealed but did not seem inhospitable. A few horses grazed quietly nearby amid impressive large stones.

When you realize the size of Hydra’s settlement, and how small the radius is around which most visitors move, a new unknown world opens before you. The only problem wandering around is that you will rarely meet someone to let you know that you are on the right track and not just hopelessly lost in the maze of narrow streets. 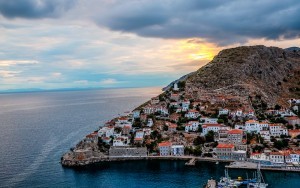 In a clearing between some stairs, alleyways and bottlenecks, I found a greengrocer with some elderly residents and a donkey, which showed me the way. The walk took a long time and the return route from Vlychos ran along the waterfront where workers began surfacing the dirt road with tarmac, dividing residents over how it should be constructed or whether it should be left as it is. 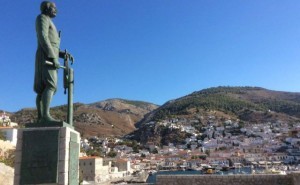 On the horizon, I could see the Peloponnese and, in between, some rocks with churches on them amidst a calm, glittering sea.

Returning to port, I almost felt a little ashamed. How could I have said that I loved Hydra without seeing her in her winter guise? That’s only half the truth.