A decision on whether the status of Hagia Sophia will change or not is expected on July 2, according to a front-page article in the Turkish newspaper Yeni Şafak. According to the Turkish newspaper, the Association for the Support of Ancient Monuments and the Environment has filed a petition with the Supreme Court of Turkey to examine whether Kemal Ataturk’s signature on the 1934 decree to transform Hagia Sophia was genuine or false. 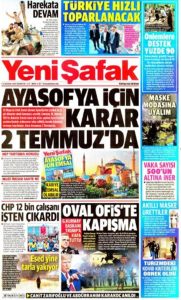 Hurriyet columnist Abdulkadir Selvi, known for his sources in the Turkish presidency, revisited the issue of the Hagia Sophia, arguing that Recep Tayyip Erdogan is seriously considering turning the historic UNESCO monument into a mosque.

“Greece is not afraid, preparing for everything”: Greek spokesperson about Turkish provocations

“I try to follow the process, as the issue of Hagia Sophia is very important. The process has not yet begun, nor is any decision expected today or tomorrow. But it won’t take long.”, he said, adding that “My impression is that President Erdogan is seriously considering turning the Hagia Sophia into a mosque” and open the structure for Islamic worship.