A teacher from the Emmauscollege in Rotterdam went into hiding because he was threatened over a cartoon that hung in his classroom, according to newspaper NRC.

The cartoon was drawn by cartoonist Joep Bertram about the attack on satire magazine Charlie Hebdo. It depicted a decapitated man in a Charlie Hebdo shirt sticking his tongue out at the jihadist who beheaded him. According to NRC, the cartoon hung in the classroom for five years.

After the school commemorated French teacher Samuel Paty on Monday, a group of Muslim girls asked for the cartoon to be removed. According to the newspaper, they said the lecturer was guilty of blasphemy and refused to listen to explanations that the cartoon depicted a jihadist, not the prophet Muhammad. 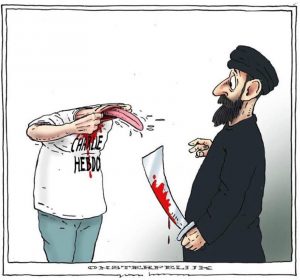 A photo of the cartoon was shared on social media, after which the teacher received threats. The police confirmed the threats, saying on Twitter that they’re taking the matter “very seriously” and took visible and invisible measures to protect the man.

French teacher Paty was decapitated on a Paris street last month after he had shown a cartoon depicting the prophet Muhammad in class during a lesson on freedom of speech.

In a letter to parents, the Emmauscollege said that they were shocked by the threats against their lecturer. “We’re making every effort to ensure that our school remains a safe place for everyone so that students can go to school in peace and quiet.”

According to NRC, several teachers told it that they no longer feel safe at work.