A pool of water near the Dead Sea was recently found to have turned red. The Jordanian Water Ministry was sending technical teams on Saturday to take samples and find out the reason for the color change, according to Jordanian media.
Local residents circulated photos of the red pond on social media, wondering how the change occurred. 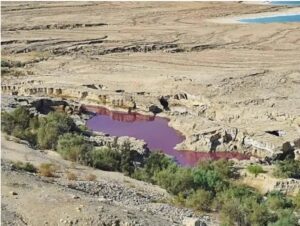 Although water turning red may conjure up thoughts of the biblical plague of blood, scientists believe the cause is much more down to earth.
Sakhr Al-Nusour, the head of the Jordanian Geologists Syndicate, told the Jordanian Al Ghad news that the red color could have been caused by algae, iron oxide or the addition of substances by humans to change the water’s color. 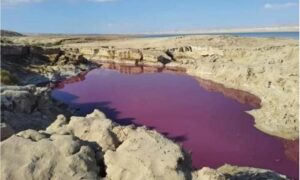 A spokesman for the ministry, Omar Salama, told the Jordanian Petra News Agency that the pond is small and isolated from the waters of the Dead Sea. The results of examinations of the pond will reportedly be released in the coming days.

Last year, the Alexander River ran blood-red due to blood from slaughterhouses in the West Bank flowing into the river, according to the Society for the Protection of Nature in Israel.