The ambition of Turkish President Tayyip Erdogan is not only the landing on the moon of a Turkish spacecraft by 2023(!), but also the complete…”turkification” of the words “astronaut” and “cosmonaut” used today in the Turkish language because they are of Greek origin.

Announcing Turkey’s 2023 space program, marking the 100th anniversary of the founding of the modern Turkish Republic, Erdogan urged Turkish linguists to look for and find a Turkish translation of the terms “astronaut” and “cosmonaut”, with out the Greek roots of these words used in most languages ​​of the world.

“I appeal to our linguists to find a Turkish name for Turkish space travelers”, Erdogan said, prompting a variety of comments on social media.

Reacting to Erdogan’s call, his governing partner and leader of the far-right MHP, Devlet Bahceli, suggested replacing the word “astronaut” with “Cacabey”, which refers to the 13th century Emir of Kırsehir, Nurettin Cibrilbin Cacabey, who showed a special interest in astronomy.

Turkish Defence Minister provokes again: “If you talk about friendship, demilitarize the islands”! 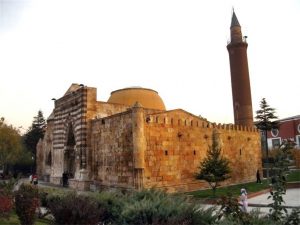 Cacabey built in the city a seminary that functioned as an astronomy high school, while he built – as the Turks claim – the first observatory. Today, Cacabey’s seminary survives in Kirsehir, in central Turkey, and is a tourist attraction.