For a second day in a row, the international media welcomed the opening of Greek tourism, lauding the Greece using the emblematic image of Santorini as the centre-point of its articles.

The reports in international media and agencies do not refer only to the island and the sunset, but mainly to the way in which Greece and the government dealt with the pandemic, health protocols and security rules. 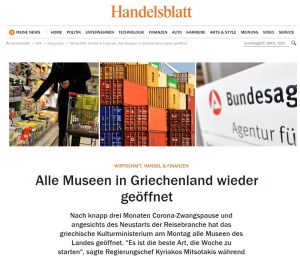 Against the backdrop of the island of Santorini, the Greek Prime Minister is opening the tourist season, the German newspaper “Handelsblatt” writes. The German medium’s correspondent states, among other things, that the number of visitors has dropped by 99% this May at Santorini Airport compared to last year.

“Mitsotakis,” the newspaper writes, “sees a return to important values. For him, the Greek summer is “the feeling of joy, freedom and peace. “No one can take that away from us,” he said. When asked where he would spend his summer vacation, he replied with a laugh, “What holiday?” 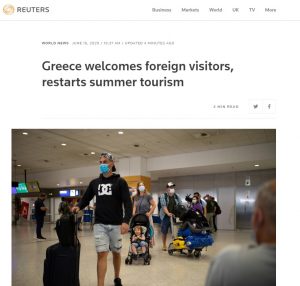 “Greece welcomes foreign visitors, restarts summer tourism”, is the headline of Reuters. “From the picturesque island of Santorini, Prime Minister Kyriakos Mitsotakis told reporters on Saturday that his priority is to make Greece the safest destination in Europe.”, the newspaper writes.

“We are once again putting the most important production engine in the country ahead” and “we are putting an end to the anxiety of 700 thousand workers in the tourism industry in a methodical and convincing way”, announced the Minister of Tourism Haris Theocharis from Santorini, reports Agence France-Presse (AFP). ) in a report broadcast by Santorini, entitled “Santorini is waiting for the return of tourists, between fear and impatience.”

Greek PM Mitsotakis on CNN: “The plan for the opening of the country is well thought out” (video)