The piece is titled “Life on the water: how to spend two weeks boating between the Cyclades”,

The British National Geographic published an article lauding the beauties of the Cyclades in the Aegean Sea. In the piece, entitled “Life on the water: how to spend two weeks boating between the Cyclades”, the author puts Naxos and the small Cyclades at the top of the list.

For crowd-free islands, Naxos and the Minor Cyclades have been fiercely guarded by those in the know. Slowly though, travellers are catching onto their electric blue seas, powder-soft sands, scented hiking trails and sleepy villages. Hire a boat and sail between them — before the secret’s well and truly out.

California Is Among the World’s Largest Car Markets (infographic)

Days one-four: Naxos
Charter a boat in Mykonos, leaving the busy hotspot behind for the first sail of your journey. It’s a salty, windblown crossing to Naxos, covering 22 nautical miles, and you’ll likely arrive at Chora’s port in the balmy evening heat. Spend the next day meandering around its jumble of whitewashed houses, stone alleyways and churches, lorded over by the castle of Hora whose surrounding mansions are still inhabited by Catholics of Venetian descent. Be sure to try the local citron liqueur, kitron, and pay a visit to the Archaeological Museum with its wonderfully preserved collection of Cycladic figurines, as well as the temple of Apollo, a huge marble gate built in 530 BC. Set your alarm early the following morning and get a bus to Aria Spring for a three-mile-round hike to the tip of Mount Zas — the highest point in the Cyclades — along sage-scented trails, and through orchards, olive groves and vineyards. At its summit, you can gaze down on Naxos, with the other islands no more than pinpricks in the Aegean. Back down at sea level, and before heading to the coast, make a side trip to the village of Apeiranthos. This is a place untouched by the passage of time, rising like a fortress from the foothills of Fanari mountain. Admire the architecture — unique among Cyclades villages — over a plate of local cheeses; the graviera, made of cow, sheep and goat’s milk, is the most famous. Next up, head to the coast. Plaka beach, just south of Chora, has water that glistens a thousand shades of blue, and plenty of beachside tavernas to enjoy and beer and plate of freshly caught fish.
Need to know: Mykonos has boat hire options for every type of sailor, from bareboat to skippered to fully crewed yacht chartering. Shop around before you choose which operator to go with. 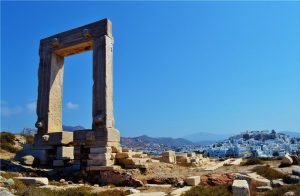 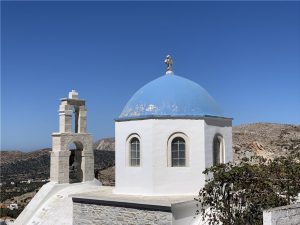