Police detained a total of 374 people on Sunday in Athens, of which 135 were turned into arrests, for the violation of the Covid-19 lockdown measures during protest/rallies held on the occasion of the 12th anniversary of the assassination of Alexandros Grigoropoulos.

Two lawyers, Thanasis Kampagiannis and Costas Papadakis were among those initially detained but were later released. According to SKAI TV, some of the suspects were transferred to the Attica Directorate of Foreigners. The same sources say that a total of twelve attempts at holding rallies were prevented.

The Athens Bar Association issued a press bulletin expressing its stern protestation to the Police and the Ministry of Citizen Protection over the detainment and arrest of its members, stating the act was a serious blow to the core of the rule of law and the essence of their legal practice. 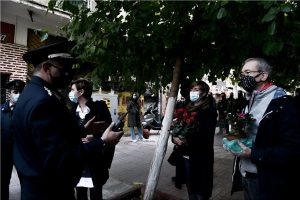 Meanwhile, an internal investigation has been launched after a video emerged of a police officer mockingly playing around with flowers placed at the point of the murder of Alexandros Grigoropoulos.

During the rallies, police and protesters clashed with officers using tear gas and stun grenades to disperse the crowd.