It will stay up until May 12

Ankara continued its provocations on all fronts against Greece, with the latest one involving lighting up a huge sign between the two minarets of the Hagia Sophia reading “There is no God but Allah”.

The lights of the inscription were lit once again on Sunday night, during Iftar as soon as the Muslim fast ended after it had initially been lit on Saturday.

Hagia Sophia, after 86 years, reopened as a mosque, and the movement of placing the inscription was an event that was advertised for days in the country, acting as a seal of the decision to convert the church into a mosque.

In fact, the Prefect of Constantinople (Istanbul) visited the Hagia Sophia on Saturday for the ceremony that took place there.

The light sign will remain until the end of Ramadan, ie on 12/5. 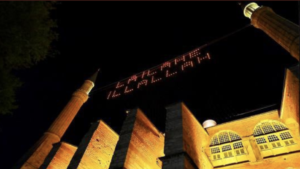 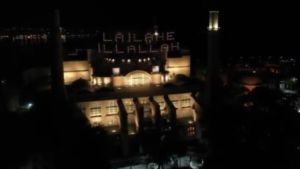