Famed Beatles rocker Ringo Starr was knighted by Prince William on Tuesday for his services to music, the BBC reported.

The 77-year-old drummer received the honor during the event at Buckingham Palace. 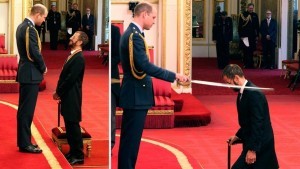 “It means a lot actually,” Starr told the outlet. “It means recognition for the things we’ve done. I was really pleased to accept this.”

The Royal Family congratulated the musician on social media.

Today at Buckingham Palace, the Beatles drummer was honoured by The Duke of Cambridge for his services to music. pic.twitter.com/bdSe2lrRwn

Starr’s knighthood was bestowed more than half a century after The Beatles first went to Buckingham Palace to receive MBE awards.

He and Starr are the lone surviving members of the famous band.

“I had dinner with him last week and we were both actually laughing about where we came from, and we’ve ended up in the palace and it’s now Sir Paul and Sir Richard,” Starr told The Associated Press.