The severity of the heavy rainfall and storms battering Athens and other parts of the country can be seen in some chilling photos showing passengers plodding through waters after evacuating a bus stuck in a flooded underpass on the old Poseidonos Avenue in Athens.

Due to the rising level of water after the heavy rainfall, the bus on the Piraeus-Voula route was trapped under a bridge, with passengers forming a human “chain” in order to safely exit the vehicle and leave the spot.

The water covered almost the entire bus, leaving only its roof visible, as the water level rose. Many roads have been closed and there has been huge traffic disruption.

Passengers wade through high water as they evacuate a bus stuck in a flooded underpass in southern Athens, Thursday, Oct. 14, 2021. Storms have been battering the Greek capital and other parts of southern Greece, causing traffic disruption and some road closures. pic.twitter.com/jGVcnTvGFo 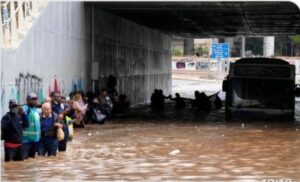 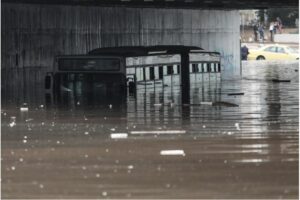 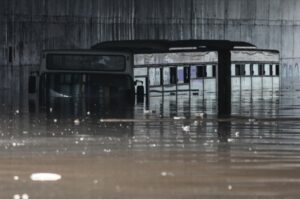