Skopje has already begun to violate the Prespes Agreement, just a few weeks after its ratification.

At the Berlin International Tourism Fair (ITB) the neighboring country participates with the motto “Macedonia your next destination” and “Macedonian Timeless” in its pavilion.

With smaller letters -that can barely be seen- one may be able to read the words “Tourism Organization of Northern Macedonia”.

The German organizers, however, mention the country on the website of the exhibition as “Republic Nordmazedonien”. 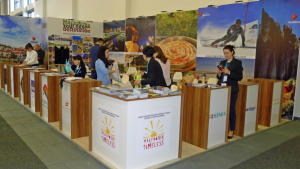 The travel site omorfataxidia.gr, which covers the Berlin Tourism Fair, reports: “At the same time in the Greek pavilion, there are stands with three Macedonias. Eastern, Central and Western. It is doubtful whether foreigners understand what Macedonia is after all”.