The UN’s top court handed Somalia control of most of a potentially oil and gas-rich chunk of the Indian Ocean on Tuesday after a bitter legal battle with Kenya, which strongly rejected the ruling.

Kenya got only a small slice of the disputed tract of sea off the East African coast in the ruling by the International Court of Justice (ICJ).

Kenya’s President Uhuru Kenyatta responded strongly, saying his government “rejects in totality and does not recognise the findings in the decision”.

With Kenya refusing to recognise the “biased” court’s authority, all eyes will be on what Nairobi does next in one of the world’s most troubled regions.

Somalia urged Kenya to “respect the international rule of law” following the verdict by the court based in The Hague. 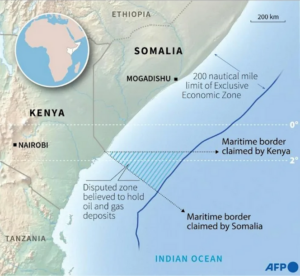 Newsweek: Turkey is becoming a problem for NATO & the US should pay attention – Analysis

Judges unanimously ruled there was “no agreed maritime boundary” in force and drew a new border close to the one claimed by Somalia.

Chief judge Joan Donoghue, reading a summary of the judgment, said the “court is thus satisfied that the adjusted line… achieves an equitable solution”.

Somalia dragged Kenya to the court in 2014 after years of efforts to resolve a dispute over the 100,000 square-kilometer (38,000 square-mile) tract failed.

The ICJ’s judgment is final and cannot be appealed, but the court, set up after World War II to rule in disputes between UN states, has no means of enforcing its rulings.

States can however go to the UN Security Council if another country fails to obey a ruling.