The Turkish President Recep Tayyip Erdogan’s visit to Greece has ended and it seems the outcome was not to the liking of the “neo-Sultan”, as he continues to provoke on the issue fo the Lausanne Treaty.

Through his visit to Greece, Mr. Erdogan managed to confirm the perception in the West that he is an erratic and quite arrogant leader, who believes he has the right to meddle in the affairs of all the neighbouring countries and promote his revisionist ideas of a new Ottoman hegemony in the wider region.

During his 2-day visit in Greece he managed to get into a verbal spat with Greek President Pavlopoulos in front of the cameras, where his host “schooled” him on matters of international laws and the Lausanne Treaty, with the Turkish leader often turning to his aides for help (they handed him notes to respond to Mr. Pavlopoulos).

One of the things, however, that few spotted during the visit, which could be interpreted as some indication of the underlying sentiment and “atmosphere” of the Greek-Turkish relations is the look in the eyes of four specific “Evzones”, members of the Hellenic Elite Honorary Presidential Guard. Their gaze was fixed on the visitor and some might say the intensity present in their looks speaks a thousand words. 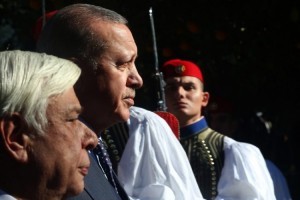 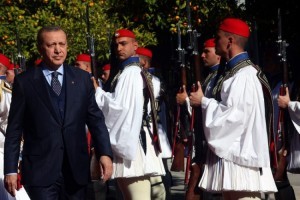 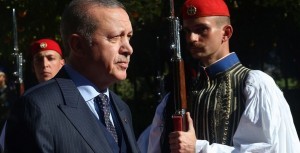 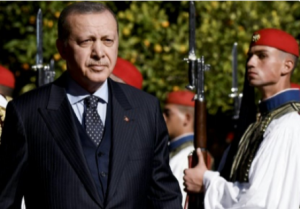