Police in Oregon were in a slimy situation on Thursday after a truck carrying 7,500 pounds of live hagfish failed to stop at a construction site and spilled its contents onto the highway and over surrounding cars.

Oregon State Police and the Depoe Bay Fire Department shared pictures on Twitter of the bizarre accident, which took place on Highway 101.
(DON’T click to enlarge…) 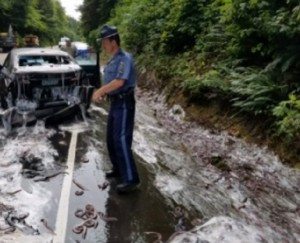 According to The Associated Press, the truck driver failed to stop at a construction site along the road, causing one of its containers of hagfish to topple and land in the opposite lane. 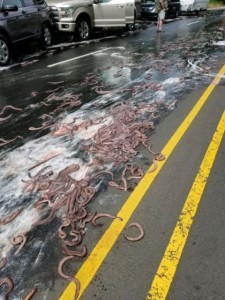 The container hit a vehicle and triggered a four-car pileup. Then the container’s wriggling contents sloshed onto some of the vehicles involved in the crash. 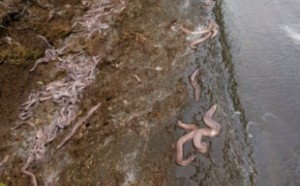 Although no humans sustained major injuries in the crash, there were a high number of hagfish casualties.

Pacific hagfish, also known as slime eel or snot snake, are considered one of the most disgusting animals in the ocean, per Smithsonian Magazine. Although they look similar to eels, they are actually a fish that has no jaws or bones. Hagfish still have two rows of tooth-like keratin which they use to burrow deep into carcasses to eat their meals from the inside out. 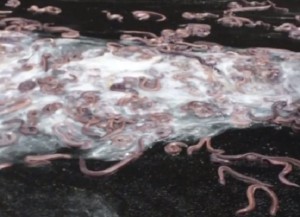 When distressed, the fish produces a white, sticky slime all over its body. This allows the hagfish to slip away when predators attempt to eat it, leaving behind a gulp of goo. Marine scientist Andrew David Thaler wrote on his blog that a single hagfish is capable of filling a five-gallon bucket with slime “seemingly instantly.”

The hagfish, which is used in Korean cuisine, were on their way to South Korea, officials said. 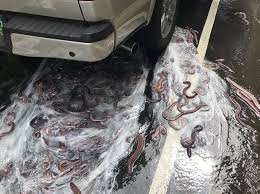 First responders were apparently amused by the slimy spill and made light of the situation on social media. The Depoe Bay Fire District called the incident “operation eel cleanup,” and the state police tweeted ”#Cleanup on Aisle 101.” 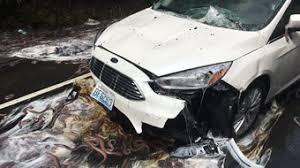 Another tweet showed an officer standing in the middle of the spilled fish. The caption: “What to tell the #drycleaner?”

Thaler urged the crash victims to scoop the dense slime off their vehicles and throw away their clothes because “hagfish slime is so tough and dense that scientists are looking into using it to create a natural lycra.”

He also advised his readers to take a moment to appreciate the slime eel for what it is. 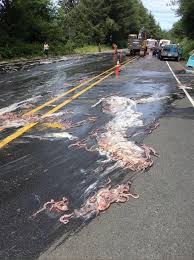 “People always find ways to be grossed out by strange marine creatures, but when you think about it, hagfish are magnificent. 300 million years ago, they figured out a good way to be a deep-sea scavenger and stuck with it,” he wrote.

“They’re efficient, tough and stubborn. They secrete a viscous slime that’s unlike anything else in this world. We know almost nothing about them, but what we do know is nothing short of incredible,” he added. “They are weird and they are wonderful.” 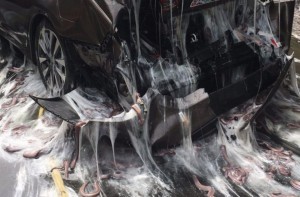