The Turkish Foreign Affairs Minister, Devlut Cavusoglu continued the aggressive rhetoric against Greece, only a day after a provocative report by a Turkish site disputed the sovereignty of the Greek island by accusing the Chief of the Greek General Army Staff, Alkiviadis Stefanis of illegally visited the island of Oinouses! Mr. Cavusoglu responded to a statement made by his Greek counterpart Nikos Kotzias during a recent interview that Greece had taken all the precautionary measures to avoid any Turkish soldier landing on the isles of Imia. “If the duty of the Turkish chief of army staff required he set foot on Imia he would have done so”, the Turkish Foreign Minister said. He went on to say that Turkey had set foot on any land it had to. “Our stance on the Imia issue is clear”, he underlined. Commenting on the matter of the 8 Turkish military officers, who were accused of being accomplices in the failed coup attempt against President Erdogan, and the ruling by the Greek courts to block their extradition Mr. Cavusoglu said that decision by Greece was an indication of bad neighbourly relations. 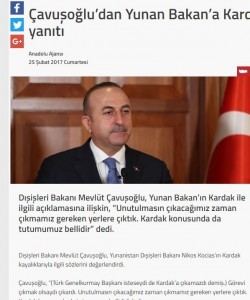 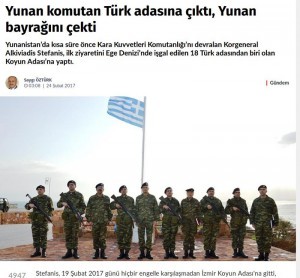