Salvini: “On Sunday Albania will be in a state of emergency”!

As the June 30 local elections scheduled for the government are approaching, the situation in Albania is getting more dangerous by the hour.

Opposition supporters, who have said they will stay away from the June 30th elections, are trying to prevent the preparations by destroying the technical infrastructure (polls, ballots, etc.) in cities and villages in Albania, often clashing with the Police.

But what is most worrying, is the number of reports coming from the opposition according to which Rama, apart from distributing money to increase participation in Sunday’s vote, is also arming his supporters with weapons in order to prevent the opposition from attempting to block the vote next Sunday!

The country’s President Ilir Meta today announced a new date for the municipal, October 13th, but Prime Minister Edi Rama insists that it will be held on Sunday, June 30th.

The Italian Deputy Prime Minister Matteo Salvini stated today at a news conference, that he spoke to the Albanian President Ilir Meta about the political crisis in the country. 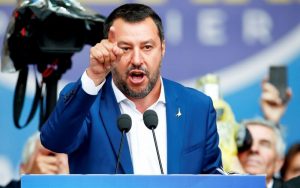 Salvini said in his statement that Albania’s Prime Minister is making local elections with the participation of only candidates from his own political party.

“I contacted Albanian President Ilir Meta, because on Sunday Albania will be in a state of emergency. It is a conflict that can lead to civil conflict, as has been seen in recent weeks.

The local elections held by the Prime Minister have been canceled by the President. Opposition parties have withdrawn and only the Socialist Party that governs will participate. I try to communicate with all parties to avoid such a conflict”.