Trained for a week on a massive data set of portraits, a neural network spits out striking images of nonexistent people

Every stranger’s face hides a secret, but the smiles in this crowd conceal a big one: These people do not exist. They were generated by machine learning algorithms, for the purposes of probing whether AI-made faces can pass as real. (Call it a Turing beauty contest.) University of Washington professors Jevin West and Carl Bergstrom generated thousands of virtual visages to create Which Face Is Real?, an online game that pairs each counterfeit with a photo of a real person and challenges players to pick out the true human. Nearly 6 million rounds have been played by half a million people. These are some of the faces that players found most difficult to identify as the cheery replicants they are.

The faces were made using a technique invented in 2018 by researchers at Nvidia, the graphics processor company. Trained for a week on a massive data set of portraits, a neural network became capable of mimicking visual patterns and spitting out striking images of nonexistent people. (Some of the software’s guts resemble the code that swaps faces in so-called deepfake videos.) West and Bergstrom made their game in part to prepare the public for a phonier future. “We wanted people to be aware that you can create these kind of images,” West says. 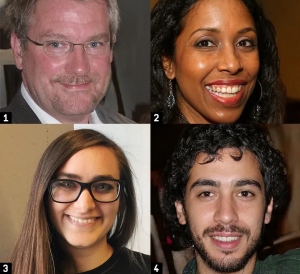 (Which one of these faces is real? Click link bellow to find the answer)

The fakes aren’t flawless—the software doesn’t know the rules of human anatomy and struggles with backgrounds and earrings. On average, players could identify the reals nearly 60 percent of the time on their first try. The bad news: Even with practice, their performance peaked at around 75 percent accuracy. West hopes that studying how we fall for inhuman humans may lead to tools that can help unmask them; future research may include tracking people’s eye movements as they gaze upon unreal faces. Physiognomy-forging technology will only get better, and so will chatbot software that can put false words into fake mouths. Did you just swipe right on a bot? Ah well, the world is full of deceptions. WIRED hid a ringer on this very page: One of the faces pictured is, in fact, real. Can you find it?