Biden said the two would “work on areas of common interest”

UPDATE: The two leaders’ private discussion ended after almost two hours, followed by extended discussions between the US and Russian delegations.

According to what has become known, the two leaders will not give a joint press conference after the end of the conference.

White House officials said Russia was pushing for that direction, but the United States resisted because they did not want to give Putin a chance to create a situation similar to the one he had after meeting Trump in 2018 in Helsinki.

In addition, they said they were aware of Putin’s desire to appear and speak in public as “having secured the best from a US president”.

“This is not a contest about who can say better things in front of a press conference or try to embarrass each other”, Biden said on Sunday, explaining the decision.

Joe Biden and Vladimir Putin are at the Villa La Grange in Geneva from 14:00 on Wednesday, for the scheduled bilateral summit.

The two leaders were welcomed by Swiss President Guy Parmelen (in the city of peace, as he said), before passing inside the mansion, to start the talks.

Shortly before the cameras and the press left the room, Putin thanked Biden for his “initiative to meet”. “I know you made a long journey and we have a lot of work to do. US relations with Russia have several issues with each other and their resolution requires a meeting at the highest level. I hope our conversation will be productive”, he said.

Biden, for his part, said the two would “work on areas of common interest”.

According to CNN, Biden smiled at some of Putin’s remarks, but in general the eyes of the two leaders were “frozen”, not exchanging many glances.

According to the original program, the Biden-Putin meeting can last from one to five hours, while there are no specific plans for the conversation between the two leaders.

Information, however, wants them to discuss the pandemic, the fight against cybercrime and the recently intensified bilateral relations. 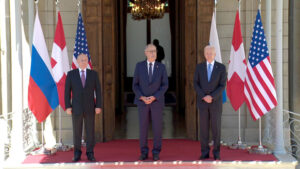