If Blue Planet has taught us anything this year it’s that there’s still so much we don’t know about the Earth’s oceans.

Scientists estimate that around 90% of the water on the planet is still unmapped, while more than two thirds of all marine life still unidentified.

It means that new species are still being discovered every day. Like this little guy, who’s affectionately being referred to as…”headless chicken monster”.

Discovered lurking off the Gulf of Mexico during an exploratory dive by the National Oceanic and Atmospheric Administration (NOAA), the headless chicken monster is a sea cucumber more formally known as Enypniastes eximia – or “the dreamer”.

It spends much of its life on the sea floor, but is capable of swimming if it needs to – for example, if fleeing from a predator. And if it’s like most other sea cucumbers, it likely doesn’t have a true brain or any proper organs, instead using its nerve endings to react to touch and light.

The NOAA has been carrying out federally-funded studies of the US portion of the Gulf of Mexico. Between 30 November and 20 December they performed dives using a remotely operated vehicle and found the headless chicken monster on the eleventh dive. 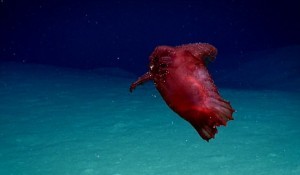 They also came across a host of other previously unknown underwater creatures, including new types of octopus, squid and sea spider.

Still, the headless chicken monster is a cuddly ball of fluff compared to the absolute horror of the sea that we all learned about on Blue Planet earlier this year – the Bobbit worm: 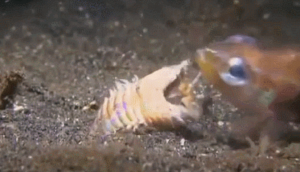 Thanks for that, Blue Planet. We’d rather be face-to-face with a great white shark.

Tags With: creatureGulf of MexicoNational Oceanic and Atmospheric Administration (NOAA)oceanphotoscienceseausavideowater