Where does the members of the Greek Royal Family rank in the British line of succession?

The Royal Central is a website dedicated to everything that concerns the royal families of the world but with a specification on the British Royal family and it is run by a small team of editors who are responsible for commissioning and editing all of its content.

In there we found an interesting article which includes the members of the Greek Royal Family and more interestingly, their position in the British line of succession.

Royal Central is taking a look at the members of the Greek Royal Family who are in the British line of succession.

How are the two families connected? The Duke of Edinburgh, Prince Philip was born into the Greek and Danish royal families. Born in Greece, his family was exiled from the country when he was an infant. He is the only son and the fifth and final child of Prince Andrew of Greece and Denmark and Princess Alice of Battenberg.

During the Greco-Turkish War in 1922, Philip’s uncle, King Constantine I, was forced to abdicate. The new military government arrested Prince Andrew, along with others, and the commander of the army, General Georgios Hatzianestis, was executed along with five senior politicians. Prince Andrew’s life was believed to be in danger at that point. In December, a revolutionary court banished Prince Andrew from Greece for life.

Constantine I of Greece, Philip’s uncle, was born in 1868. He is the eldest son of King George I and Queen Olga. One of King George I’s sisters married into the British Royal Family, which meant that Edward VII was George I’s brother-in-law.

Paul of Greece, Constantine I’s son, is a first cousin to Prince Philip.

Constantine II is the nephew of King George II and is also the second child and only son of the King’s brother and heir presumptive, Crown Prince Paul (later King Paul). Constantine II reigned as the King of Greece from 1964 until the abolition of the monarchy in 1973.

His reign would not come without controversy. Constantine II was involved in the Apostasia of July 1965 – a political crisis centred around the resignation of Prime Minister Georgios Papandreou. The resignation created unrest among the population and ongoing political instability.

Constantine II married Princess Anne-Marie of Denmark in 1964, and together, they had five children. Constantine II is also a former competitive sailor and Olympian, winning a goal medal in the 1960 Rome Olympics.

Because Anne-Marie is 380th in line to the British throne, Constantine II is 605th, Pavlos, Crown Prince of Greece follows in the line of his mother because he is the eldest son of the couple. 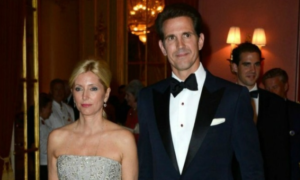 Crown Prince Pavlos is the eldest son and the second child of Constantine II and Anne-Marie. Pavlos was the heir apparent to the throne of Greece and was its crown prince from birth until the monarchy abolition (although he still holds the crown prince title as a courtesy). He is a male-line descendant of Christian IX of Denmark and is also a Danish prince.

According to Article 45 of the Greek Constitution of 1864 and the Greek Constitution of 1911, the crown descends according to primogeniture among descendants of George I with males coming before females. In 1952, the clause was clarified to note the crown is inherited with preference to descendants of the current king with males taking preference and the sovereign’s daughters following in respective order.

Pavlos married British-born heiress Marie-Chantal Miller in 1995. Together they have five children.